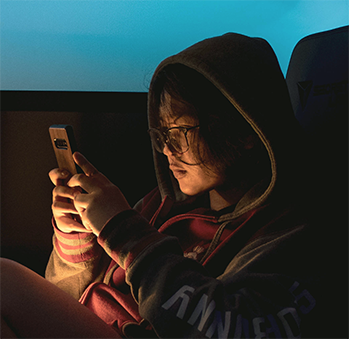 At the start of the year-long course, the Senior Tutor Philippe Close noticed that Seiya was making work that was making all her classmates take notice and making them want to up their creative ambitions.

The first unit where Seiya particularly shone was in the Digital Manipulation unit, where she created flawless (and scary) screen-capture videos of her entire process of turning herself into a zombie! Her work was then simply amazing throughout the year. Seiya was interviewed about her creative history when she was exhibiting work during the Access to Creative Digital Media Course:

Could you talk a little about yourself, and what got you started as a creative practitioner? I suppose it started out with me finding ways to entertain myself when I was young. I grew up in quite a remote village in the province of the Philippines. There was a lot to do, but my grandmother didn’t allow me to play outside much in fear that I would hurt myself since I was very frail growing up. I had to stay inside most of the time, and that gave me a lot of time with my imagination. When you live with such an overactive mind that creates otherworldly fantasies and scenarios, it becomes an itch in your brain that is begging to be released. My release was art. Drawing to be exact. There were these images in my head that I just needed to explore and let out, and I did that by drawing.

Do you think your whole creative process consist of you taking these images inside your head and putting it down somewhere? Exactly that. There’s this…thing, where I see a sort of motion picture in my head when I’m inspired and evoked by anything from life: emotions, music, people, relationships etc. and I have to put it down somewhere and share it. I have to visualize it, physically, and that’s pretty much how I have expressed myself over the years. I have explored a variety of mediums over the many years I have been an artist, from: paintings, music, illustration, film, games, photography, etc. to express the emotions that have conjured in my head and heart.

After Completing the course

After Seiya completed the Access to Creative Digital Media course, she had her pick of universities she could go to. In the end Seiya chose to go to a Prestigious Russell Group University – York, where she is studying a BSc in Film and Television Production. Good luck Seiya!